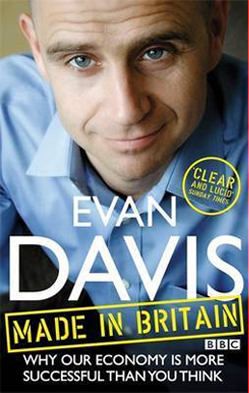 The central argument of Made in Britain is set out in these paragraphs from the Preface to the paperback edition. It is an argument of two parts.. and you need to read both. The first part says we did well to exit industries in which emerging economies could outcompete us; the second part says we did not do well enough! Hence, the difficult adjustment we now have to make.

“The basic story of the UK is one of an economy that has been surprisingly dynamic in recent decades. Contrary to popular perception, we did not stand still and idly watch while China and other countries stole our industries and our jobs; we in fact adapted to the changing environment. Our economy moved up-market as we attempted to migrate towards industries in which we had a competitive advantage against newly emerging industrial economies who could mass-produce many manufactured goods at prices lower than anything we could afford to match. We shifted away from lower grade manufacturing industries into new ones based more on selling intellectual property, services and specialist manufactured goods.

As a result, our economy grew successfully in those years. Far from being complacent, we were mostly regarded as a pioneer in carving out a new role for ourselves. Other Europeans watched as year by year, our economic performance exceeded theirs. If you want one simple fact to remind you of why we were not insane to follow the path we did, just note that our national income grew faster than that of each of Germany, Italy and France in the 1980s, the 1990s and the 2000s. We were clearly doing something right. As fast as we exited some industries, we found new ones that raised national income per head. On average, we got richer, not poorer. And in addition to that, contrary to popular perception, there more jobs in Britain rather than fewer. In 2011, even after three years of crisis, there were over 29 million people in work in the UK, one and a half million more than a decade before, and five million more than in 1981. Indeed, so strong was the UK labour market, it succeeded in absorbing hundreds of thousands of foreign workers who wanted to find a job.

Nothing that has happened in the financial crisis has undermined these contentions. That we did make that move up-market in the years running up to the financial crisis remains unarguable. The share of manufacturing in our output declined considerably, yet our economy got bigger not smaller. And even as we let our manufacturing sector shrink relative to everything else, the value of our manufactured output was actually growing until hitting its all-time peak in the first quarter of 2008.

Our national move up-market was not some kind of mad departure from all economic logic, but was a natural response to the environment confronting us. Some kinds of de-industrialisation made manifest sense. If we could get the Chinese to make our manufactured items, we could then do more lucrative things like designing and marketing the manufactured items the Chinese made. We didn’t have to take leave of our senses to engage in this process. It was part of our economy’s evolution from blue collar to white collar.

So far, so good. That is a broadly positive account of what occurred in the UK. A flexible economy adapted to the price signals it faced and gravitated towards higher value industries. The statistical evidence is that it succeeded in doing those things. What could possibly go wrong? The answer of course came with the financial crash. It was not just a random piece of bad luck, it in fact exposed two hugely important failures of that new British economy.

Firstly, it highlighted the weaknesses of the financial services industry which had been the pin-up sector of the new economy. Much of its success turned out to be illusory. It had expanded partly by taking extra risks (which it had not itself understood) and thus had not created nearly as much valuable output for the UK as bankers and everybody else had generally supposed. As a result of the crash, it ended up a subsidy-junkie, obtaining taxpayer support on a scale that old manufacturers like British Leyland could only have dreamed of enjoying.

But there was a second and more significant problem too. Although the UK had changed a lot and achieved strong economic growth, its new economy simply didn’t have an export sector that was big enough to sustain the lifestyles to which the nation had become accustomed. Our economy was still exporting a lot, in up-market sectors, but it was not exporting enough. For all the successes, the domestic-facing sectors of the economy were too big relative to the export-facing ones. Prior to the crash, the nation had spent, had borrowed and had imported on an unsustainable scale. It was that unsustainable spending which underpinned the activity which allowed the economy to grow as fast as it did. That meant that when the crash came along, the borrowing came to an end as did the spending and something had to change. We either had to built a bigger export sector, or accustom ourselves to a different, less sumptuous lifestyle. We suddenly realised the story of UK transformation wasn’t quite as remarkable as we might have thought because we needed to import unsustainably in order for the whole thing to work”.

This level-headed account of how the nation makes its living by the BBC’s Evan Davis accepts that something went awry before 2007-08 and that there are problems to be solved but refuses to overdo the gloom. “Britain is not a basket case,” Davis reminds us. After all, it remains one of the richest nations. “At the same time, we have no grounds for snootiness. Brian Groom, The Financial Times

Without pining for an idyllic mill town past where stoic workers cheerfully churned out clothes for the masses before skipping down to the working men’s club for a well-deserved pint – nobody’s arguing that manufacturing jobs were pleasant – this was the identity and call to arms of the industrial north. It’s what shaped and united entire communities. And now it’s gone. What does Davis have to say about it? Not much. Gavin James Bower, The Guardian

Think about the things you own or use. How many are British? The Honda Civic in the drive? Made in Swindon, as it happens. The Apple iPhone in your pocket? Made in China, designed in California, but the chips made in China are under licence from ARM Holdings of Cambridgeshire. Your tea-time treat of a Cadbury chocolate bar? Made in Bournville, Birmingham, but by the Illinois-based transnational Kraft, which recently took over Cadbury. Years ago, as Evan Davis argues, things were simpler. Sean O’Grady, The Independent

Click here to watch the Evan Davis lecture at the Open University (November 1st 2011): Reflections on the British Economy

Read the reviews or purchase a copy at Amazon.